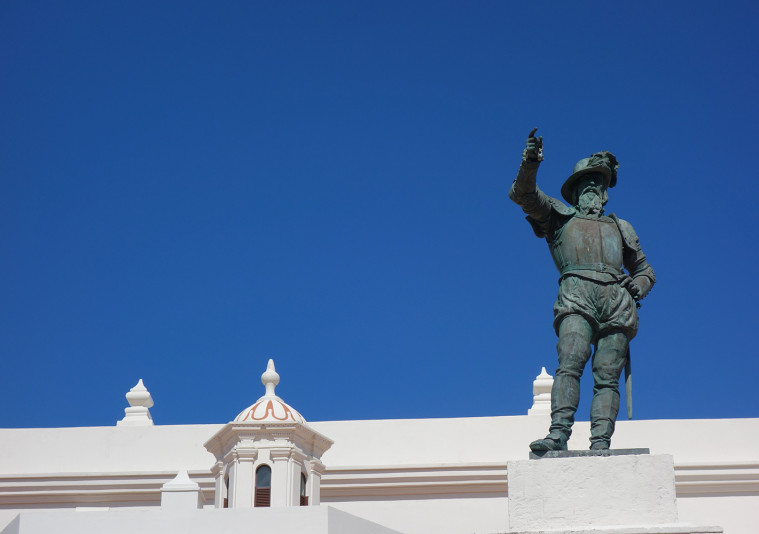 Drinks with Rickie Martin and Orlando Cruz? Sign me up! Wouldn’t that be a dream? I swear I like this town even more every time I visit—and Rickie’s Instagram posts certainly help. Triple respect to Puerto Rico for surviving a flurry of hurricanes in 2017, the neglect that followed, and the pandemic that followed that.

Beautiful beaches, incredible food, a rich history, secluded places to escape to, an actual café society and amazing diving—San Juan is the perfect getaway—even for an extended long weekend.

Set up camp. In Condado, sink into the scene at the tidy Condado Ocean Club and soak up the upscale beach-club vibe, infinity pool and all. Down the street, La Concha is a tropical and modern Vegas-style whirlwind, fun and fabulous. Entering the lobby at Hotel Casablanca is like stepping into an art gallery. Very old and right in Old San Juan, so you can stumble home after dinner. Ditto Hotel El Convento, a restored former convent and a member of the Small Luxury Hotels of the World. A few steps down the street is the convent’s sister property Palacio Provincial. Loaded with historic charm and luxe good looks, not to mention impossibly high ceilings, it has a quiet sophistication about it from the original grand staircase on up to the wee rooftop pool. And the Fairmont El San Juan is a classic overlooking two miles of beach in the Isla Verde Beach district, a super-nice neighbourhood just two miles from the airport.

See the sights. Old San Juan makes for plenty of roaming, so carve out an afternoon of exploring it. A few hours at the forts—Fort El Morro and Fort San Crisóbal—will yield a small peek at the town’s history. Founded by the Spanish in 1521, this thick-walled museum is a UNESCO World Heritage Site, and well worth a visit. Better yet, book the Spoon walking tours and learn about the history of the city and the island through its food, with a morning walkabout on the blue cobblestones that more or less includes three lunches.

MORE TO DO: TAKE THE ART MURAL TOUR

Hit the beach. Condado Beach is my favourite, at the foot of Calle Vendig. Unlike a more secluded resort beach where you see the same tourists getting redder and redder every day and the same tanned torsos jogging every morning, the people-watching here varies by the minute, with the San Juan population mixing right in. Ocean Park Beach is just a bit further east, attracting a younger crowd out for the rec activities (volleyball, paddleball, etc.) and a louder good time. Windsurfers head farther east to Punta Las Marias.

Chow down. The cuisine in San Juan is a smorgasbord of fresh seafood and barbecue staples—from the traditional haunts to the fine-dining rooms to the simple food trucks. Everything is delicious and the prices are reasonable everywhere. Be sure to try the traditional mofongo at least once: fried plantains mashed with garlic and pork, served with shrimp or chicken.

TASTES TO TRY: WHERE TO EAT IN SAN JUAN

Party down. Ask your hotel doormen for the newest spot to hit for drinks after dinner (which is late, by the way). Tiny bars pop up and the latest and most fun hole in the wall won’t be obvious during the daytime. The must-do drinks night needs to include La Factoría, a shabby chic series of bars, one room after another, each with a different vibe and music. La Placita is a Santurce market square that turns into a hopping outdoor gathering spot by night.

Go rogue. For a relaxing overnight or two, ferry it to the pristine island of Vieques, just off the eastern shore. The island is a major dive centre. There’s also Mona Island, off the west coast, a designated ecological reserve offering crazy different kinds of wildlife and cool cave exploring. Hop on a boat tour to the wee island of  Culebra for a swim on the famous Flamenco Beach, which constantly makes international top 50 lists.