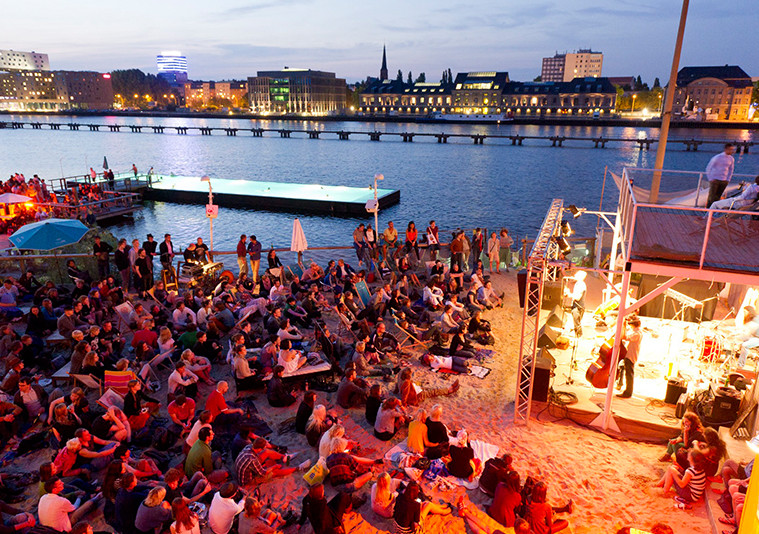 Arena Berlin is an industrial monument and an event space all in one. (Philip Koschel)

The history, the architecture, the incomparable rhythm of life—Berlin really has it going on. (Scroll down for the slideshow.)

Step back in time. While Berlin itself is very in tune with its past, Museum Island is really steeped in history. Much of this five-museum complex has been cleverly restored since World War II, and now houses centuries of priceless art and cultural artifacts. The New Museum holds Early History collections and Egyptian treasures, including the famous 3,300-year-old bust of Nefertiti, while the Pergamonmuseum features reconstructions of massive archaeological structures. SMB.museum

Get some retail therapy. For shopping, head to the Kurfürstendamm, one of the most elegant boulevards in the city, lined with all the big-name shops. Rounding the corner onto Tauentzien Street, you’ll soon hit the Kaufhaus des Westens (KaDeWe), the largest department store in Europe. Find time to also visit both the Friedrichstrasse and the Hackesche Höfe, a series of interconnected courtyards north of the River Spree that date back to the early 1900s. Kurfuerstendamm.de, Friedrichstrasse.de, Hackesche-Hoefe.com

Head to the beach. Almost one-third of Berlin is either parkland or water, so it would be a shame not to take advantage of it. Rent a bike and head southwest over to the Strandbad Wannsee on the eastern shore of Wannsee Lake, the largest inland beach in Europe at 1,000+ metres long. Find waterslides, boat rentals, volleyball, soccer, trampolines and private cabanas. This Cultural Heritage site has been packing them in for more than 100 years—including the nude bathing section.

Hit a beer garden. The stereotyping is real: Beer-drinking on picnic tables is a national pastime. What’s great about this tradition is both the simplicity and the inclusivity, with everyone from university kids to retirees hunkering down to plates of hearty fare, mugs in hand. Nowhere is that more evident that at Café am Neuen See in the heart of the Tiergarten Park, a romantic lake-side retreat in the middle of town—and one of the best spots to people-watch. CafeAmNeuenSee.de

Stay up late. Hip Berliners step out around midnight. The Kreuzberg area’s Watergate nightclub, at the south end of the Oberbaum Bridge, has both inside and outside dance floors with an amazing view of the River Spree. Be sure to do both sides of the river, crossing north into the Friedrichshain district to Revaler Street, which is teeming with clubs and bars. An outdoor concert at Arena Berlin in front the Badeschiff beach bar makes for a perfect summer night.