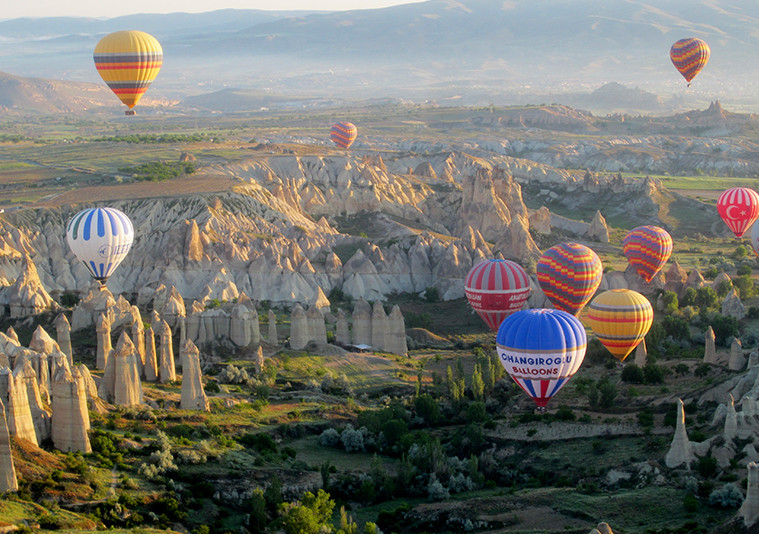 A balloon ride over Pigeon Valley is a must-do. (Doug Wallace)

Istanbul is incredible, but a one-hour flight into the heart of Turkey brings you to Cappadocia, a historical gem in Nevşahir province.

Cappadocia is characterized by a landscape of soft rock created from layers of volcanic ash millions of years old. The unusual swaths of aptly named “fairy chimneys” in the valleys are steeples of rock that remain behind as the supporting rock around them erodes.

Go underground. This region was once the realm of the Hittite Empire, laying claim to settlements that date back to Roman times and further. Ongoing archeological excavations are unearthing entire villages, such as the Sobesos Ancient City, as well as “hideout” cities deep within the hills, once used to protect townspeople from marauders and religious persecution. Of the 35 underground cities, Kaymakli and Derinkuyu are the widest and deepest, respectively, where visitors can wind through a multi-storey, thousand-year-old stone maze of rooms, including stables, kitchens, storage and prayer rooms.

Find God. The still-vibrant frescoes in the rock-cut churches of the Göreme Open Air Museum preserve the religious history of Cappadocia. A UNESCO World Heritage Site, this cluster served the spiritual needs of people for centuries, acting as a monk settlement, a pilgrimage site and now one big history lesson on early Christianity. The Church of the Buckle is the largest cave church, its ninth to eleventh century frescoes representing the 12 apostles and many saints, along with scenes from the life of Christ.

Get up in the air. One of the best ways to see the lay of the land in Cappadocia is from a hot-air balloon. On a nice day, you can see more than 100 balloons coasting in and around villages, vineyards and fairy chimneys. These typically leave the ground at dawn.

Sleep in a cave. Many boutique cave hotels dot the map near Göreme National Park, Nevşahir and Ürgüp, with rooms that were originally carved into the mountainside centuries ago. Two in particular stand out a mile for their attention to detail and all-out luxury: Yunak Evleri Cave Hotel in Ürgüp and Gamirasu Cave Hotel in Ayavalı.

Watch for clay pots. Kebabs are not all the same. Keep an eye out for testi kebab, an Anatolian beef, lamb or chicken stew baked slowly in clay jugs with green peppers, tomatoes, garlic and butter.