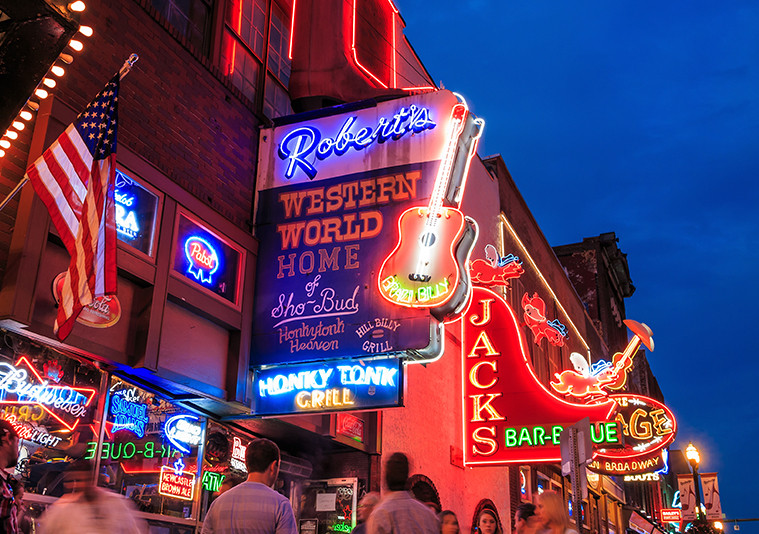 Go for the music and stay for the bologna sandwich. Or vice versa—whichever gets you down to Nashville, Tennessee, the famed Music City.

Nashville is a live music-oriented spot that totally amps up its country roots while making plenty of room for the new talent, just like it always has. The Country Music Hall of Fame and Museum is a must-visit, as is the Johnny Cash Museum and the 2,000+-seat Ryam Auditorium, the winter home of the Grand Ole Opry (from November to February).

Nashville may also be the place to visit an actual honky-tonk, and Lower Broadway is full of them, brimming with country, western, folk, bluegrass, gospel, zydeco and rock. Oh, and lots and lots of cold beer.

And fried bologna sandwiches. For whatever reason, the fried version of this classic sandwich is a specialty. The top four places to mow down on one include: Martin’s Bar-B-Que Joint, Puckett’s Gro. & Restaurant, Robert’s Western World and Tenn Sixteen Food & Drink Co. The sandwich is a mix of kitsch kuisine and kid’s comfort food, a budget-conscious staple in diners for decades.

Outside the honkey tonks, the city’s emerging food scene is starting to see some ink in the national magazines, featuring way more than just the southern comfort fare. Keep an eye out for Dolly.