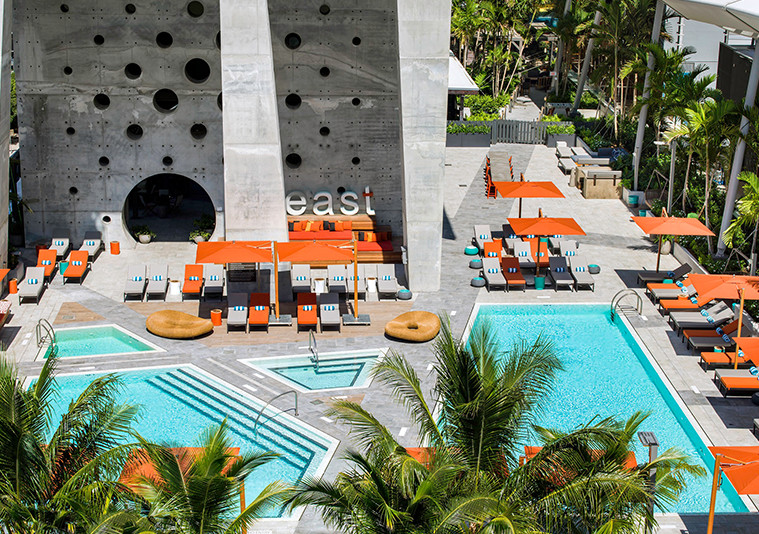 For those of you heading to Art Basel in Miami, there’s a new place to rest your head. East Miami is a new Swire Hotel, the first one in North America from this Hong Kong-based luxury brand. (Other East locations in Hong Kong and Beijing opened in 2010 and 2012 respectively.)

It’s location is key: The 352-room East Miami is anchored to Brickell City Centre, downtown Miami’s the new $1-billion mixed-use development project. Here, you’re close to South Beach, Wynwood and the Design District, and the airport is only 15 minutes away. Rooms are fresh and minimal, with a complete control system you manage with the hotel’s app. Be sure to ask for a room with one of the cute balconies.

But where are we heading first? To Sugar, the 40th-floor rooftop bar and Asian-inspired garden, of course. This is Miami’s new spot to grab a cocktail at the Balinese bar, plus a bite or two of Asian tapas, and soak in the jaw-dropping panoramic view. An upper level sports a wrap-around teak deck.

Quinto La Huella restaurant on the fifth floor is an offshoot of Uruguay’s swank Parador La Huella in Punta del Este. It’s focus is barbecue, of course, with oak-fired ovens churning out classic grilled fare. It’s also quite massive, with seating for 350+ over almost 10,000 square feet.

First-time visitors get special offers and rates during the hotel’s opening phase, so take advantage. From $340. Visit east-miami.com.