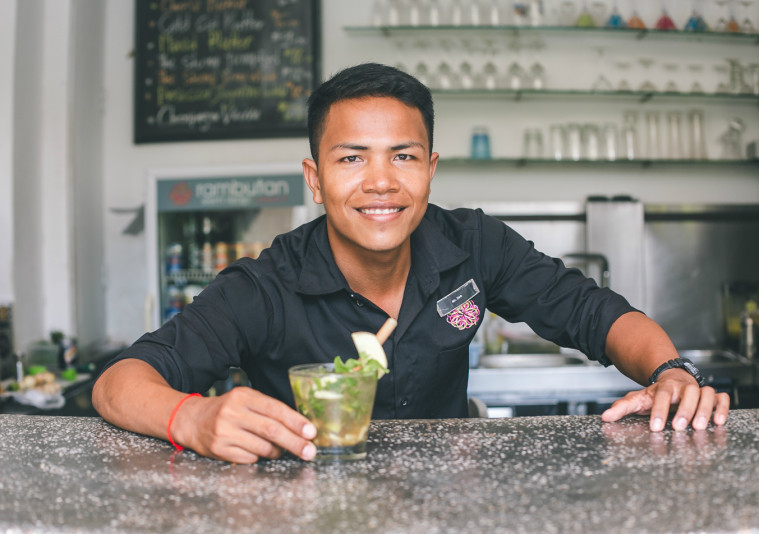 The bar at the Rambutan is Siem Reap's best-kept secret.

On the quiet Wat Damnak side of Siem Reap (so named after a landmark temple) sits a little oasis on a pedestrian side-street. The Rambutan is a three-pronged property: a main hotel with 16 rooms, a 10-room resort wing and five luxury apartments.

Vibe: “People feel at home here. With the pool in the middle and the rooms built around it, it’s like Melrose Place,” Tommy the manager says. “It’s not big, but there are enough corners that you can have your own quiet spot.” The hotel started off being super-gay, but now the clientele is very mixed. “We get the nice crowd, a mix of Americans, Canadians, Australians, Europeans, and those closer to home—Chinese, Japanese and Korean. We get a lot of solo women travellers, mostly older, who come back a few times a year.”

Rooms: The Rambutan style is instantly relaxing—a mix of Balinese, French, Khmer and Indonesian elegance—things the owner has picked up in his travels over time. “Every room is different,” Tommy says. “The palm wood we are using is not tropical, so it’s harder, and environmentally better than teak. All the tiles are handmade locally in Siem Reap—even the new ones look like they’ve been there forever.”

F&B: A fun little dining room churns out Western and Khmer dishes from a kitchen helmed by six young locals from the local hospitality schools. Local ingredients—the herbs are insane—give the menus an extremely fresh twist. We start off most evenings having the bartenders mix us sublime pepper-infused martinis.

Off-Site: Strike out in the morning for at least one full day of temple-trekking at Angkor Wat; you can fit three of the more popular ruins into the day’s agenda. You could easily spend a week combing through each of the temples. Counter your day in the countryside with a town day doing nothing but wandering the shops, buying exquisite handwoven fabric, fingering the plethora of handbags, disappearing into the spas—which range from the simple to the sublime—and sitting on patios. Go to Bar Code to watch a drag show, which, even on a weeknight, draws local men and women, expats and tourists alike.