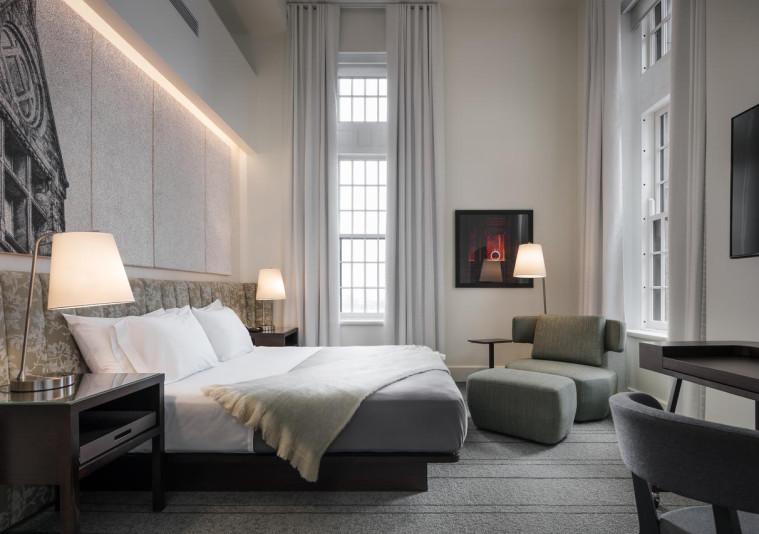 Billed as an “urban resort and conference center,” Hotel Henry is set within national historic landmark the Richardson Olmsted Campus, a former mental-health facility. It makes creative use of historic space with a modernizing of the architectural grandeur after years of neglect. This sounds like a movie synopsis.

Vibe: Opened in 1880 as the Buffalo State Asylum for the Insane, the building was designed by famed architect Henry Hobson Richardson in Romanesque Revival style. Hotel Henry is the first tenant in what will be a major renovation of the whole complex, injecting large open spaces with an art-gallery atmosphere over five floors. At any given time, the hotel exhibits about 100 pieces of art. Dramatic white corridors feature massive windows bringing in buckets of natural light with a river of blue carpet injecting a swirl of colour.

Rooms: As with any revamped building, the layout of the 88 rooms and suites vary throughout. Décor is pared-down and modern, the 18-foot ceilings,14-foot windows (with motorized blinds) and recessed lighting adding a dash of drama. Wedge pillows dress up a comfortable platform bed and an adaptable wall system keeps things orderly acting as an open “closet.” Sunny bathrooms are equipped with European-style Porcelanosa fixtures.

THINGS TO DO: IN BUFFALO

F&B: Just off the hotel’s second-floor lobby, 100 Acres: The Kitchens at Hotel Henry is a restaurant, bar, bakery and coffeehouse for hotel guests and neighborhood locals, offering many different seating and service options centred around one common menu. New American cuisine highlights regional products and produce with a made-from-scratch credo. Standard hotel staples are given a Mediterranean twist—marinated chicken with raita, yellowfin tuna with skordalia, seared scallops with a raisin caper vinaigrette, roasted beets and tahini. Vegan, vegetarian, gluten-free and dairy-free options cover the bases.

Extras: The hotel has a variety of spaces for workstation setups and more than 20,000 square feet of meeting and event space, much of which is also filled with art. A 24-hour gym and a running path among the surrounding 42 acres of parkland keep guests in top form.

Off-Site: Hotel Henry is in Buffalo’s north end, within walking distance of the Albright-Knox Art Gallery and the Burchfield Penney Art Center. Delaware Park is a five-minute drive away, as is the hip neighbourhood of Elmwood Village. Frank Lloyd Wright’s Martin House is a 10-minute drive away.