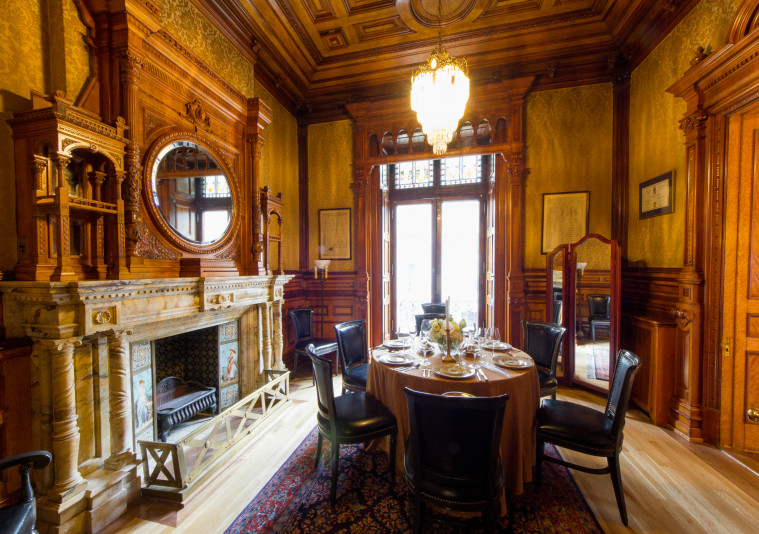 Le Mount Stephen is a reworked Montreal mansion radiating both the storied grandeur of an earlier time and the chic glamour of the modern age.

Opened in May 2017, Le Mount Stephen is a modern 11-storey, 90-room hotel built behind and anchored to historic George Stephen House, a Renaissance Revival mansion built in 1883 in Montreal’s Golden Square Mile.

First a residence for this prominent businessman (once president of the Bank of Montreal and of the Canadian Pacific Railway), the mansion served as a men’s social club for most of the 20th century.

Vibe: Part of the city’s heritage, the building is a bit of Victorian magic, the original aesthetic of the interior design having been breathtakingly preserved—Cuban mahogany, Austrian stained glass, Italian marble, Hungarian light fixtures and all. The craftsmanship of the woodwork up the walls and across the coffered ceilings is beyond stunning. Visitors enter through the stone entranceway and into a grand foyer, with hotel guests then passing through to the hotel lobby in the new part: contemporary and airy, bright and white with dashes of old-style glamour infused into the modern look.

Rooms: Starting at a generous 32 square metres, rooms are airy and bright, despite the tiny little honeycomb-style windows. Blond wood and neutral colours lend a natural vibe, punched up with luxury amenities like zillion-thread-count sheets and pillow menus. Nice, nice bathrooms feature heated floors and an extremely odd but fun chromotherapy rainforest shower that washes you with a sequence of colours as you shower. The two-level suites are off-the-hook beautiful, as is the luxury loft if you’re celebrating and even if you’re not.

F&B: On the main floor, British-inspired Bar George helmed by noted Chef Anthony Walsh is managed by Oliver & Bonacini. The kitchen turns out updated English fare with a definite Quebec influence—things like Baked Sea Bass, Beef Wellington and Rabbit Leg Confit. The restaurant and the bar, with a wing that was once a winter conservatory, are festooned with wood and crystal for days.

Extras: A 24-hour fitness centre can help you work off dinner, and an efficient, two-treatment-room spa can take care of the wellness side of things. Le Mount Stephen sports more than 6,500 square feet of event space, including the opulent 5,000-square-foot Elizabeth Ballroom. Private rooms in the mansion—what were once Mr. Stephen’s offices and private chambers—are gorgeous. The Strathcona Room is particularly elaborate with its lemongrass wood paneling, ornithological stained-glass windows and Italian marble fireplace replete with original tiling.

Off-Site: The Golden Square Mile is at your finger tips. Dougie needs a new pair of shoes.