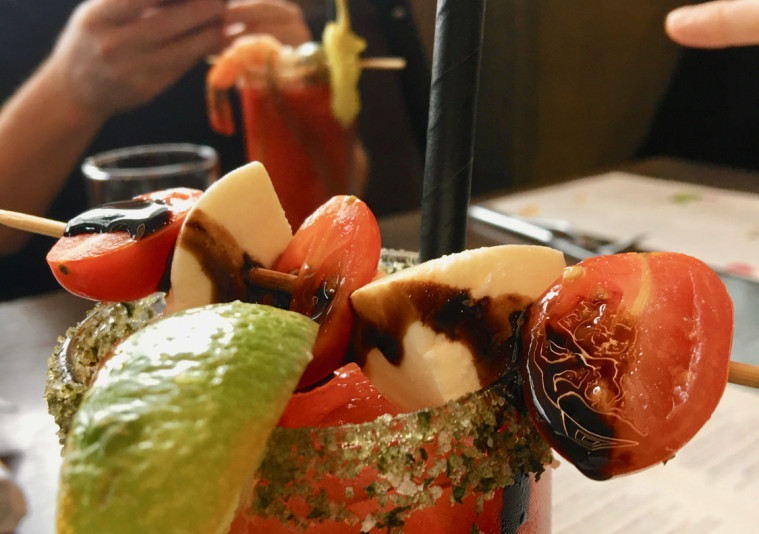 The Italian Caesar at Provence in Vancouver doubles as an appetizer. (Doug Wallace)

BRITISH COLUMBIA—Every so often I abandon my aversion to Clamato juice (too much MSG) and order a Bloody Caesar, usually just to go with the flow. Or to make morning drinking OK. Bloody Mary’s seem to be more my style in my dotage, I’m finding.

Years ago, I used to work with bartender Jim Kita at Bamboo Club, who took a few seconds to shake his Caesars. The result was always the same: The customer always ordered a second one. While the best Caesar in the world is generally the one you make at home—it’s perfect, right?—I found two in BC that were well worth their salt.

The first at venerable brunch spot Provence Marinaside in Vancouver, where their Italian Caesar had me deconstructing the Caprese-salad style garnish with extreme care, licking my fingers and chasing each mouthful with a sip. I made it last as long as possible. The reduced balsamic glaze had me conjuring it up at home a few weeks later, a culinary-mixology take-home.

Then at Whistler’s La Bocca Italian eatery (seeing a theme here), my giant Bloody Caesar came with a couple of slices of salami on top of a sprig or six of arugula, weighed down with big, fat green olives. Another note to self. Hangover be gone. And it was.

WHERE TO STAY: IN WHISTLER