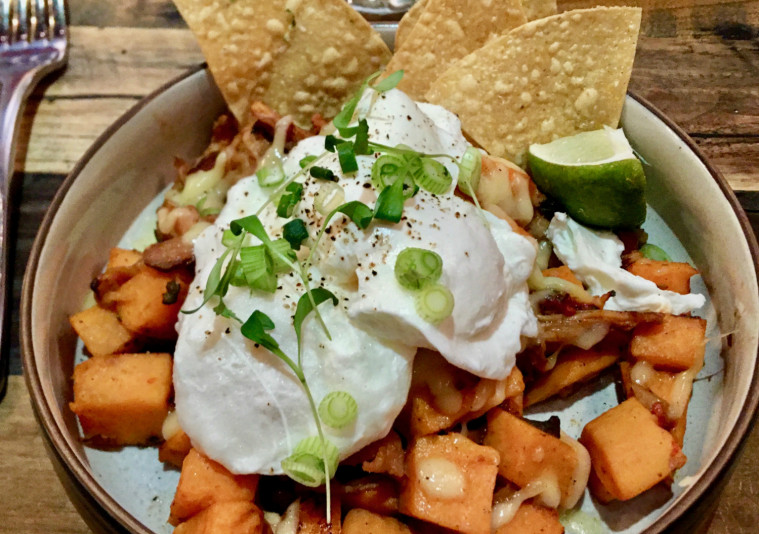 Smoked chicken and yam hash is so crazy it just might work! (Doug Wallace)

I eat my weight at breakfast

COLUMBUS, OH—Just before the U.S.-Canada border closed, I manage a few days in Columbus, checking out the incredible Art After Stonewall exhibit at the Columbus Museum of Art. It’s also an opportunity to scour the town, touted as one of the fastest-growing cities in the U.S.

And with all the activity comes all the eating. I love watching Americans order in restaurants—three beverages in front of them, asking a dozen questions, asking for substitutions, more sauce-less sauce, ordering extra side dishes only to barely touch them, sending back carrot juice because it wasn’t fresh-squeezed, merely squeezed. But one of the highlights of the junket has to be three incredible breakfasts I devour, and I’m not really a breakfast person.

THINGS TO DO: IN COLUMBUS

The next day in the private dining room at Ambrose & Eve, my Mountaineer is a buttermilk biscuit sandwich (get out the gluten pills) filled with eggs, a hashbrown, bacon and a mayonnaise-style cold-egg sauce—all insanely good. I vow to return another day for the fish and grits and/or the salmon-caviar omelette.

At The Keep Kitchen brasserie in the historic Leveque Tower, I inhale an Egg in a Hole—not “the hole” but “a hole,” so sensible, as there is only one—built of toasted brioche, cured French ham and a poached egg swimming in mornay sauce, which is béchamel with cheese, like that sauce needed to be richer. Superb.

Who knew breakfast was such a thing? But when it’s 2,000 calories three days in a row, you’re pretty much left with no lunch and a piece of gluten-free toast for dinner. As if.