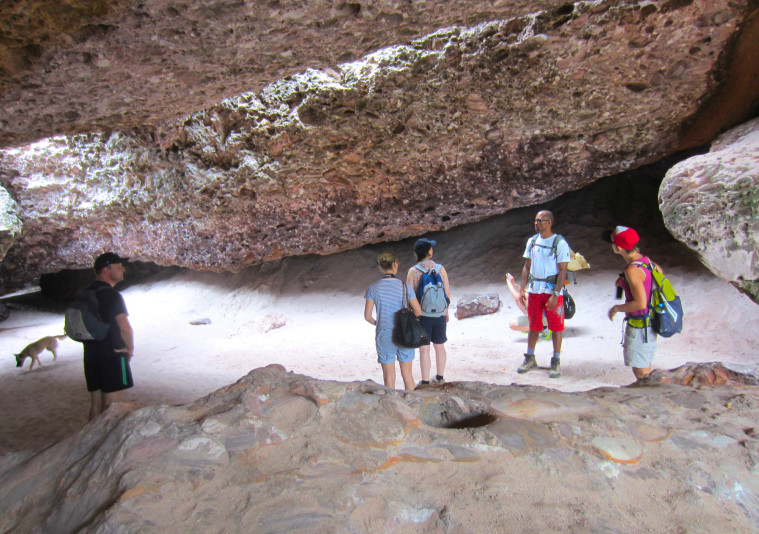 Rocking out in The Saloon of Colourful Sands. (Doug Wallace)

Take the waters. A happy little stray dog latches onto us one afternoon hiking the trails near the village of Lençóis (population 5,000) in the state of Bahia, Brazil. She is our unofficial tour guide, following us over rocks, through caves and around the pools and waterfalls that skirt this small town, which was once the nucleus of the diamond mining industry that flourished here about 150 years ago.

Follow the rivers. Just a short flight from Salvador, Lençóis has the feel of a 19th-century European village plopped down in the middle of a big park. With the last mine closing 25 years ago, it is now a hiker’s paradise, the vegetation slowly reclaiming the surrounding hills, rivers, streams, pools and caves. It’s this transition that lends Chapada some of its magic, as the various fauna return as well: beetles, tarantulas, squirrel monkeys, foxes and jaguars.

Read the rocks. The Chapada Diamantina region is composed primarily of sandstone, pelites and diamond-bearing conglomerates. The many trails, once used by miners in their search for diamonds, makes it one of the best destinations in the country for hiking. Following the Lençóis River, we swim in the red-tinged pools, letting the Primavera Waterfall crash over us, and hike through green valleys surrounded by sharp cliffs. The red colour of the water is not due to the presence of iron, but to organic matter from the forest floor. The Saloon of Colourful Sands is a geologist’s dream, the sediment evidence of the millions of years of movement and sandstone erosion.

Release the inner child. Our little dog is still at our ankles when we walk along Mucugezinho River, then up to Middle River, where water cascades down a huge sheet of sloping rock, forming a sort of natural waterslide that has us sliding down it at break-neck speed. Though it is a little hard on the rear, it’s worth it. On the way back, our canine guide ditches us to play with a couple of little pigs.

Dip and zip. Jumping in a van the next day and heading into Chapada Diamantina National Park, my intrepid travellers and I stop for a swim in Devil’s Pool, so named because it is said to be a site where diamond mine slaves were tortured. This pool and its 18-metre-high Devil’s Falls is popular with the locals on the weekends who come to get their thrills on the zip lines. Conveniently, a bar is built into the side of the mountain, in the style of the old miner houses.

Explore the underground. The Diamantina caves here need to be seen to be believed, all part of an environmental protection area. Gruta Lapa Doce, the Cave of the Sweet Water, is one of the most popular due to the incredible stalagmite and stalactite rock formations inside, sculpted by water circulation, dripping, condensation and other processes. Midway through, we switch off our flashlights for a minute or two of complete silence and darkness—a moment of eyes-open meditation. Nearby Gruta Pratinha is good for more zip lining, as well as for snorkeling down an underground river.

Keep an eye on your watch. For a short span of time in the late afternoon, the sunshine plays tricks at Gruto Azul: The calcium carbonate and magnesium in the crystal-clear water at the edge of the cave turns the pool a supernatural shade of blue in the direct sunlight. Not only that, the refraction leads you to think the water is maybe a metre deep, when in reality the depth is more than 15 metres.

Head for the hills. We finish the day with a trek to the top of Pai Inacio Hill to watch the sun go down, with a breathtaking 360-degree view of the nearby cliffs and canyons.

When you go. Visiting off-season is best, from July to November. December to March is the busiest time. Intrepid Travel offers a guided tour to Chapada Diamantina within a Northern Brazil carbon-offset experience to and from Salvador. Consider a three-day romp in Rio before or after.