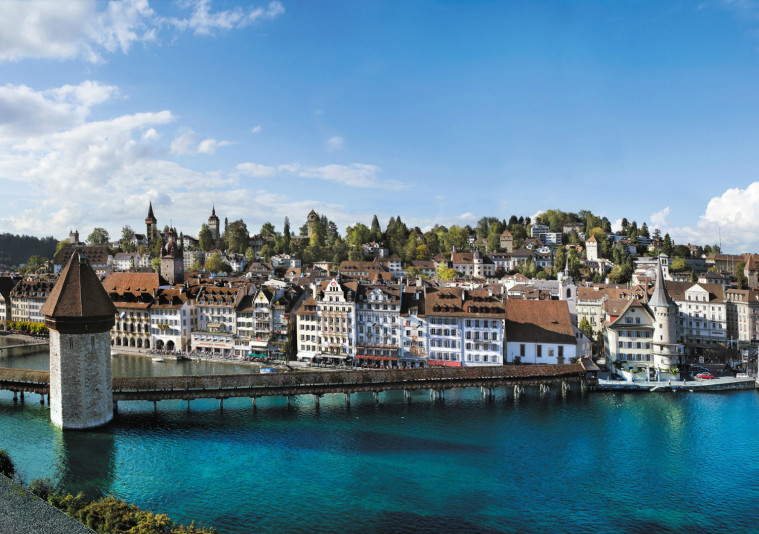 Lucerne's Chapel Bridge, with paintings inside the roofing, dates from the 14th century.

With four official languages, Switzerland has always been a healthy mix of cultures, cuisines and diplomatic points of view, drawing influences from its neighbours for centuries. But while Zurich, Geneva and Bern pretty much run the place, it’s Lucerne everybody heads to for a week off. And so should you.

This charming little town where the Reuss River flows out of Lake Lucerne was once ruled by monks, and founded in the 12th century. Tourists started showing up around 1850 when new rail lines connected the city with other parts of Europe. Now, five million tourists visit per year—summer and winter—to walk down the cobblestone pedestrian streets and across wooden foot bridges, drinking in medieval town squares and ancient churches.

See street art. Wander Lucerne’s Old Town checking out the 15th-century art that decorates many of the building façades. Better yet, find a tour guide to walk you through all of the frescoes, so you get the full backstory.

Ogle Picassos. Absorb some serious art at The Rosengart is in the city centre. Art dealer Angela Rosengart (and her father Siegfried) nurtured the talents of many of the artists they dealt with over the years, which has resulted in an impressive collection of painting—Cézanne, Matisse, Picasso, Klee, Miró and others. A friend of the family who painted Angela several times, Picasso takes up the lion’s share of wall space.

Sing along. Music lovers should make a point of checking out the calendar for the Culture and Convention Centre Lucerne, the elegant concert hall at the water’s edge known for its sublime acoustics.

Have the mac and cheese. Rathaus Brauerei is just the best name. With traditional everything, this place is heavy on the meat and generous with the beer—have the stout. By the way, the mac and cheese comes with apple sauce.

Check the view. How can you pass up the only hotel in the world where you take a funicular from the street to the lobby? Check into one of the penthouse spa suites at Art Deco Hotel Montana Lucerne and put your feet up. Built in 1910, the hotel features not only one of the best views of the lake, but six penthouse spa suites on the rooftop, built from what used to be staff quarters. The very busy and sexy Restaurant Scala, and more importantly it’s terrace, has undoubtedly one of the best views in town.

Lay your head. Lucerne has many decades of getting hospitality down right, particularly with the hotels. The Chateau Gütsch was a favourite of Queen Victoria. The luxurious Grand Hotel National Luzern has a celebrated culinary pedigree—French chef Georges Auguste Escoffier once worked in the kitchen. Old Town is filled with lots of small inns, including cute Hotel des Balances, which dates from the 1200s (not a typo). For a full-on mod alternative, Hotel Astoria is right near the train station, an affordable home-base designed by the architects who produced the famous Bird’s Nest stadium in Beijing.