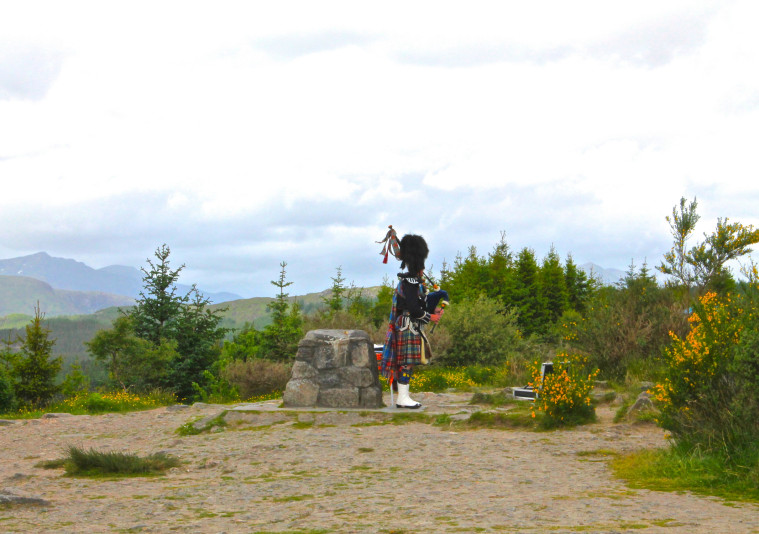 This poor, ruddy man, bless him. There were CDs for sale and everything. (Tim Stewart)

Perhaps due to the fact that the population is one-tenth that of England, Scotland feels a bit more small-town, even in the city. People tend to actually converse with you rather than just talk and you get the straight goods without having to fish for it.

With the Scottish, there always seems to be a silent standing invitation to join in—on the fun, the meal, the joke.

Scotland isn’t a place where you want to spend your whole time in the cities, nice as they are. Motoring around the Highlands is achingly beautiful and you can easily do the trip in a week. Or longer. Or a lot longer. The scenery is the biggest draw in the Highlands—endless hills and rock, trees and lakes. Driving actually becomes your main activity, as if you were on your own personal treasure hunt.

Do some drinking. A good place to start your tour is in Speyside on the Malt Whisky Trail. This is a grouping of eight distilleries that bank the fast-flowing River Spey to take advantage of its crystal clear water. Speyside produces more than half the whisky distilled in Scotland. The Scots, to their credit, credit the Irish for inventing whisky—they just don’t talk about it much.

Look for Ness. Next up is a swing west to Inverness for a cruise down Loch Ness, just to buy the t-shirt. This picturesque lake is long and skinny, cold and clear, and apparently, extremely deep. Certain tours of it will drop you off at the ruins of Urquhart Castle, where you can wander around, wondering what life would have been like constantly on the look-out for marauders climbing over the stone walls.

Get love. Relax into the loving arms of The Lovat, an award-winning eco-friendly boutique hotel in Fort Augustus. Skip the touristy Fort William and stop here instead, a beautiful village nestled at the base of Loch Ness. You can spend hours here just watching the sky change colour or waving at barges and boats being guided through the Caledonian Canal and locks, on their way through the lake system to the sea.

WHERE TO STAY: IN EDINBURGH

Stuff yourself. Carry on west around Lochs Garry, Loyne and Cluanie to Loch Duich, then cross the bridge to the Isle of Skye. A region of farming and fishing, this is a place for tourists to get back to the land—and the seafood. The Three Chimneys at House-Over-By is booked for months in advance by the foodies. The fabled Seven Courses of Skye uses ingredients sourced in Skye and Lochalsh, including the freshest oysters and crab, succulent smoked fish and a marmalade soufflé you could practically swim in. Book the chef’s table to get in on all the backstage activity. Watch out for sheep sleeping on the warm tarmac on the way home.

Find your clan. Of the castles you need to have on your list, Eilean Donan Castle near the town of Dornie is one of the best restored, the ancient home of the Clan Mackenzie and their allies the Clan Macrae. Built up and torn down for centuries, it lay derelict for 200 years before being rebuilt by John MacRae-Gilstrap in the 1920s. The castle opened to the public in 1955, and has enjoyed its time in the limelight as a location for many films, including The World Is Not Enough, Entrapment and Elizabeth: The Golden Age.