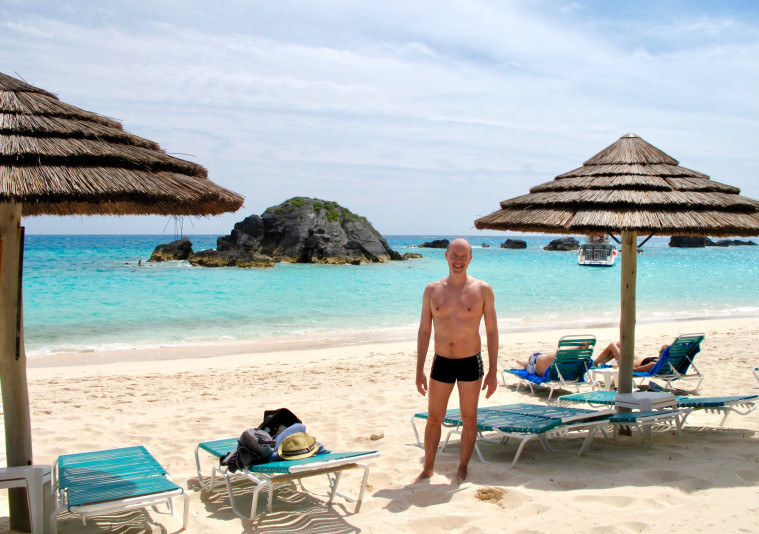 Which way to the beach, beefcake? On assignment with Chatelaine magazine's fashion team.

Bermuda is a connect-the-dot maze of 180 bits of island in the Atlantic Ocean, on the same latitude as South Carolina, about a two-hour flight from New York. With a temperate climate, as opposed to tropical like many of the Caribbean islands, this little paradise is calm and cool, with no income tax, no unemployment and no guns.

More than just the baggy shorts and big onions it is commonly associated with, Bermuda is unequivocally one of the wealthiest islands in the world, shy and private, a little mysterious. The coral walls and white roofs mimic the sand and clouds, framing the lush landscape and winding narrow roads. Left-hand drive and roundabouts reminds you of the British roots, as does the fairly buttoned-down vibe, a residual of the colonial past—all wooden tennis rackets and drinks trollies. Though far from stiff, this cheerio-ness creates a kind of time warp, and the turn-of-the-century photos on barbershop walls will look remarkably similar to the ones you’ll have on your camera.

Check in. The relaxed Reefs Hotel offers stylish comfort, and one of the cutest places to have lunch—Coconuts. The colonial-style Rosedon Hotel is a step back in time and a perfect haven for afternoon tea.

Dig into the past. Bermuda was discovered by Spanish explorer Juan de Bermúdez in 1503, and quickly became the Shipwreck Capital of the Atlantic, mostly due to the storms and a large ring reef that together have sunk an absurd number of ships off its 120 km of coastline. The first real settlers showed up nearly 100 years later, mostly all British. The first native North Americans came to dive for pearls.

Cozy up to Mark Twain. The Fairmont Hamilton Princess was a favourite watering hole of Mark Twain, whose statue sits on a bench in the lobby, as well as Ian Fleming, who dreamed up Dr. No at the bar.

Look at art. Located in the Botanical Gardens, Masterworks Museum of Bermuda Art has a local focus, but it also houses a small but interesting collection of black-and-white drawings by Georgia O’Keefe, who visited the island in 1933 to recuperate from a nervous breakdown.

Go deep. Even if you’re not a diver, the Bermuda Underwater Exploration Institute is informative, interactive and fun, documenting the area’s famous and plentiful shipwrecks. Just the recovered treasure and shell collection in the lower level is worth the trip.

Hit the links. If you’re a golfer, Bermuda has a number of excellent options. Port Royal Golf Course has been ranked by Golf Digest as the world’s best public course. Turtle Hill Golf Club at Fairmont Southampton is also not too shabby.

Do a day trip. Take the ferry to St. George’s, where not much has changed in the last century, except for perhaps the plumbing. Stop at St. Peter’s, the oldest Anglican church in the Western hemisphere, which dates from 1612. Stop at the Bermuda Perfumerie, as well as Unfinished Church, which dates from the 1870s.

Wander the docks. If you can dodge the docked cruiseshippers, explore the Royal Naval Dockyard on the northwestern tip of the islands, and take in The Royal Keep, the Clocktower Mall and the Victualizing Yard where they used to prepare and store food for the military. Stop for a pint at The Frog and Onion pub, which “continues in the victualizing business” within the 1850s-era cooperage.

Watch the birdie. If you’re just in it for the pristine paradise, ecotourism is big here, due in part to the delicate ecosystem and the fact that the early settlers enacted what is considered the first conservation laws in the New World way back in the 1600s. As a result, there are 650 types of fish and 360 varieties of birds to keep you occupied on either an underwater adventure or a lazy afternoon in a hammock.