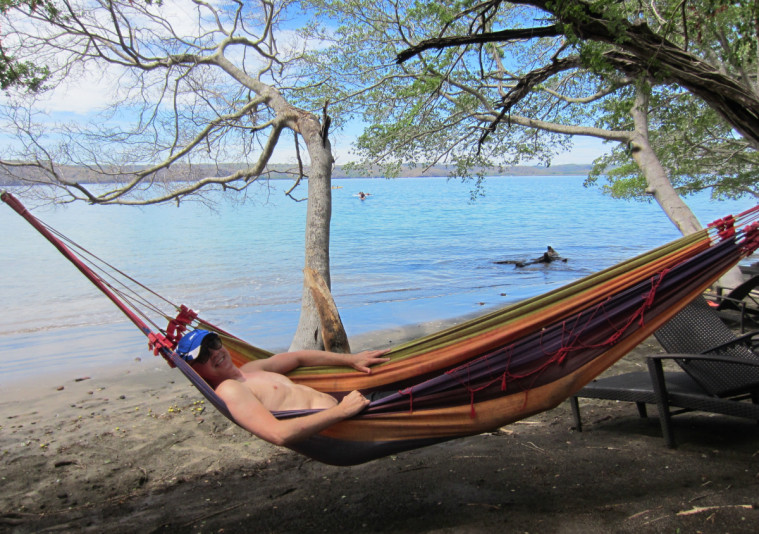 Sinking into the black sand along Culebra Bay in Papagayo.

This serene retreat in the posh part of the northern province of Guanacaste delivers local culture with a side of smart style.

Designed by noted Central American architect Ronald Zürcher, the stunning Andaz at Peninsula Papagayo is inspired by nature, buoyed by local art and crafts, and folded into its surroundings with a keen attention to the lay of the land and the wildlife that surrounds it.

Vibe: The Andaz Papagayo was big on sustainability and developing local cultural programs long before it was a trend. Visitors tend to be well-heeled yet down to earth, with interests in wildlife and nature, as well as good design and good value. And so many critters! You’ll spot tons of birds, moths and butterflies, howler monkeys and white-faced capuchin monkeys, and the coatis, who can get quite bold—surprise, surprise, they’re related to raccoons.

THINGS TO DO: IN GUANACASTE

Rooms: The 150+ spacious rooms are exquisitely designed, blending right into the bamboo trees and white- and black-sand beaches. Expect loads of low furniture, natural wood and many wildlife-influenced décor and furnishings, including basket-like light fixtures, which were inspired by the nests of the oropendolas that call this neck of the woods home. My bathroom gave way to a balcony with a shower, which was quite heavenly.

F&B: There’s a proper restaurant and bar in the thick of things at Andaz Papagayo, but the highlight is Ostra restaurant, just a little walk away from the main buildings. You feel like you’re dining in a private villa, enjoying iconic Peruvian dishes with a Costa Rican twist. A whole page of the menu is devoted to ceviche, where you choose a fish and a style of ceviche and it is then mixed to order.

Extras: The series of pools was designed to mimic the riverside, drawing a parallel to the Costa Rican culture of spending family time at the water’s edge. And during my massage at the Onda Spa on the hilltop, I felt like I was tucked into a little treehouse overlooking the bay. Each treatment room has its own bathroom and mini-balcony for a serene post-treatment cool down.

Off-Site: Papagayo is a lush peninsula of protected parkland jutting out into the Gulf of Papagayo with basically just one road in and out. But it has several multimillion dollar homes and villas, for rent by the Kardashians or Beyoncé—or you. While The Four Seasons sits on the tip of the peninsula, the Andaz looks out over Culebra Bay on the south coast, with the main Costa Rican coastline in sight along with a dazzling new Marina Papagayo. (Let’s play count the yachts!) The 35-minute drive from the region’s international airport is one of the top reasons Papagayo is favored by Hollywood celebrities flying down for the weekend. An Arnold Palmer-designed golf course is not that far away, either.