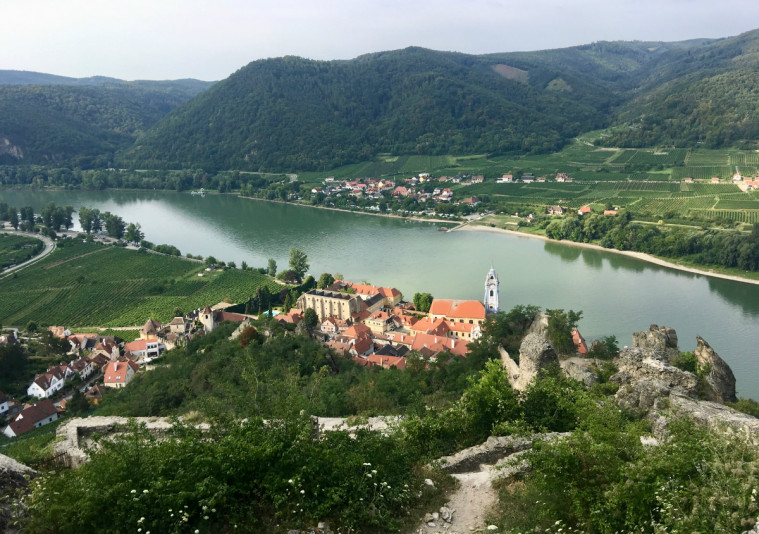 Trek the town of Dürnstein in Lower Austria early in the morning to avoid the tourist throng. (Doug Wallace)

With the famous Strauss waltz planted firmly in my head, like an ear worm, I close my eyes for a second and say a small prayer to the rain gods regarding a week-long drift down the beautiful blue Danube River. But guess what? The Danube is kind of a greeny-brown. Maybe it was blue back in the 1860s when the song first hit the charts, I don’t know. Climbing aboard the Scenic Jasper in Budapest, big smile on everybody’s face, we head for Vienna, then to Dürnstein, Melk and Linz in Austria, then on to Passau, Regensburg and eventually Nuremburg, Germany.

The variety of extracurricular activity is one of the changes the cruise industry has been floating through in recent years, as it aims to offer something for everyone—no small feat. And it was only a matter of time before somebody like Scenic turned river cruising from codgery to cool. What was once the realm of retirees, is now a multiage, often multigenerational holiday, offering a wider variety of things to do than in the past, as guests skew younger and itineraries get more active.

Make fast friends. Within the first hour of being onboard, one suave guy, Monte, starts making friends immediately, pumping hands with a smile. He makes so many friends the first day, he can relax for the rest of the week with a few “I knew I’d find you at the bar, David” and “Staying in the shade today, Deborah?” Everyone loves him. Connect early, then coast.

Have a pool party. On the Scenic Jasper, there is an actual pool scene, even though the pool only holds about a dozen people. The rest of us just pull up chairs for moral support, leaning in to the conversation. But here’s the tip: This is also where the server hovers doling out Aperol Spritzers by the trayful. So, if the texture of your cocktail has a tendency toward sad face, stick with the pool people.

Hike it off. Exercise to balance out the indulgences of the night before. While moored at the small medieval town of Dürnstein, I glom onto the plans of fit fellow passengers heading up the hillside to the ruins of Dürnstein Castle. This was where King Richard the Lionheart (Richard I) was supposedly imprisoned in 1192 during the Crusades, so we are able to work in both exercise and a history lesson. The view is insane, a little moment in time that so many travel brochures promise but few deliver.

Pop into the palace. An evening of Strauss and Mozart at the opulent Palais Liechtenstein in Vienna is totally enchanting and yes, I will say all that with a lisp. Vienna is just so beautiful you don’t really have to do anything there other than gawk at the art and architecture.

Take the side trip. Skip the crowds of Sound of Music fans in Salzburg and head instead to Bratislava, the capital city of Slovakia, and the medieval town of Cesky Krumlov, Czechia. I wander the 600-year-old streets thick with Gothic, Renaissance and Baroque style buildings, stunned by the preservation. The castle here dates back to 1240 and its now-dry moat is home to a brown bear.

Off-road it. One morning we climb on e-bikes for a three-hour guided cycling trip along the riverside path from Dürnstein to Melk, more or less racing the ship along the Danube. Highly recommended.

Look the part. As such, pack for cycling, hiking, walking, dinner with the captain, cocktail parties, dry summer heat, air conditioning and rain. Scenic ships have an excellent and affordable laundry service. Keep in mind that summers in Europe can get blisteringly hot.

Pick a different river. As well as the Danube, Scenic also sails down the Douro in Spain and Portugal, the Rhine in Germany, the Rhone and Seine in France, the Volga in Russia, the Mekong in Cambodia and Vietnam, and the Irrawaddy in Myanmar.