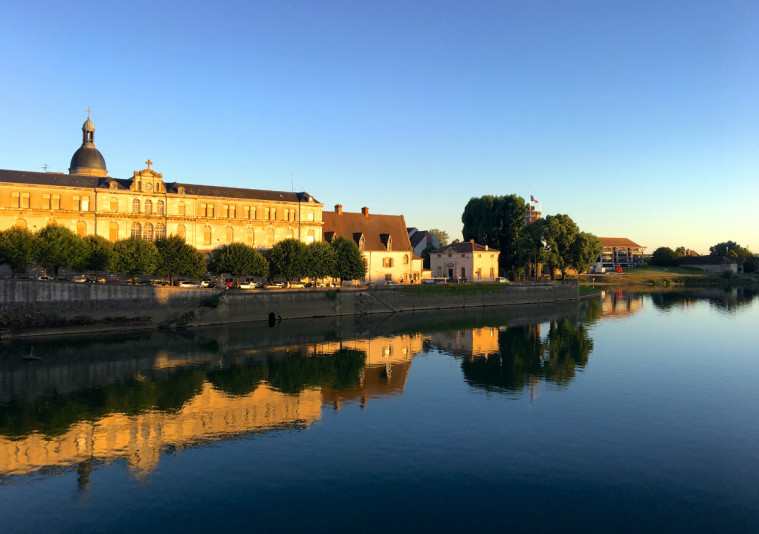 Chalon-sur-Saône sure is pretty, ain't she? (Doug Wallace)

Drinking Beaujolais in Beaujolais, lunching on quaint terraces, wandering through medieval townships—cruising the South of France reveals all this and more.

I always knew the Baby Boomers would “de-geezer” the luxury cruise industry and make it actually cool. And while the big ocean liners are undergoing a certain “degrampafication” of their own, it’s the small-ship experiences that the cool kids are booking, both on the seas and down the world’s celebrated rivers. Australia’s Scenic Luxury Cruises and Tours is a case in point, and a Rhone River Cruise confirms that cruising is more hip than people think.

Prep for luxury. Stepping on board the Scenic Sapphire in Chalon-sur-Saône, the first things that register are the tasteful touches of luxury, things that say “five-star” in a heartbeat: a cold towel, a glass of actual Champagne, marble everywhere, and a butler who gave me his number. “Call me anytime,” he said.

Taste the wine. At Mâcon, I hop on a bus tour through the Beaujolais Golden Stone region, so named after the bright yellow limestone buildings. I spend the morning at Château de Montmelas, a winery run by descendants of the Marquis de Montmelas since the mid-17th century, drinking everything they put in front of me along with the gorgeous countryside.

Mind the day-drinking. Because it’s free, you’ll be tempted to drink constantly, but don’t. A glass of wine at lunch, sure, but steady on. And if you don’t keep drinking water, you will dehydrate in the blink of an eye and have giant headaches and worse by the end of the week. I speak from experience. Europe gets really hot in the summer.

Find the foodies. Further down the Rhone in Lyon, the Saône forks with the Rhone, and my fork gets a workout; this is the gastronomic heart of France after all. The traditional Lyonnaise bouchons are the places to hit, bistros that serve French classics like creamy pike dumplings in crayfish sauce, perfectly spiced steak tartare and succulent Bresse chicken. (This is France, so even the chicken has an appellation.) The chef’s tasting menu at Michelin-starred La Mère Brazier puts me right over the edge, and that was long before they wheel out the cheese trolley.

WHERE TO STAY: IN LYON
MORE BOATS: MEDITERRANEAN CRUISE

Walk it off. Visit the castles, climb the watch towers. Do stuff. I manage hikes to keep from gaining too much weight. I have an excellent trek through the city of Vienne, a major centre of the Roman Empire, noted for the Temple of Augustus and Livia, built at the end of the 1st century BC. Don’t skip Viviers if it is on your itinerary. Guests who don’t feel like following the crowd can strike off on one of the ship’s e-bikes, with the help of GPS-assisted self-tour gadgets.

Ogle the bridge. If one of your stops is Avignon, work in some history on a tour to the ancient Roman aqueduct at Pont-du-Garde, near the town of Uzès. It was in use as late as the 6th century and then became useful as a toll bridge.

Hit the theatre. The last stop of Tarascon set me up for visits to the Instagram-friendly medieval villages of Les Baux-de-Provence and St Remy-de-Provence, as well as to the Roman Amphitheatre in Arles. It is an incredible, 2,000-year-old arena still in use today.

Lollygag. The very essence of visiting the banks of the Rhone is that you can do nothing but wander in and out of shops full of gorgeous things, and fill your suitcase with lavender soap and handmade bonbons. Or you can patio hop to your heart’s content, going from breakfast to second breakfast to lunch to tea to dinner. Or you can sit on your rear and watch the swans. This is your cinéma vérité—do as you please.