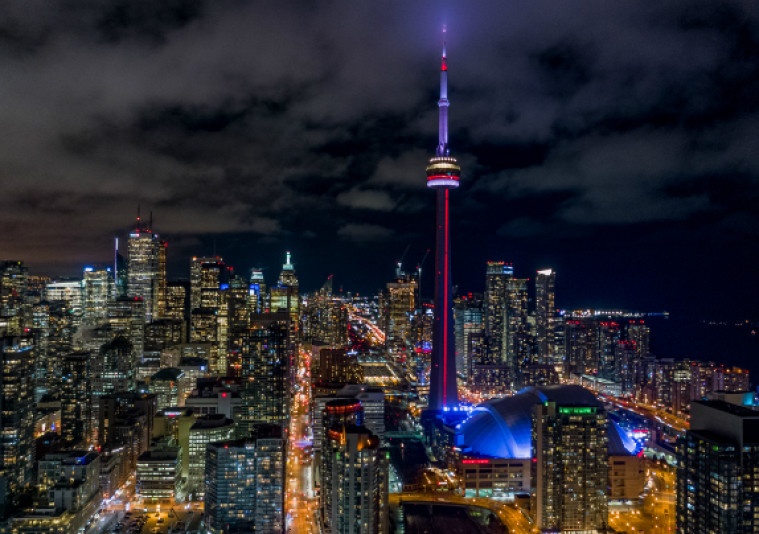 More than 200 different cultures are represented on the streets of Toronto. (Destination Toronto)

Canada’s largest city, the fourth largest in North America, is consistently ranked one of the best places to live in the world. Cosmopolitan and cultured, fun and fun-loving with an icing of unpredictability just to make things interesting, Toronto takes pride in being the dynamic, creative and safe sum of all its parts.

The city’s roots show in myriad ways, with more than 200 cultures represented on the streets. This is one of the reasons why the culinary scene is such a big deal—there are more ingredients in the pantry to pull from. With four world-class sports teams, 20,000 acres of parkland, a spirited arts scene and a vibrant waterfront with its own airport, Toronto makes a rewarding end destination—and a great pitstop.

Watch stingrays swim over your head. The Ray Bay at Ripley’s Aquarium of Canada sports stingrays and sharks, just one of about a dozen tanks filled with 1.5 million gallons of water, home to 20,000 animal species. The backlit and colour-changing Planet Jellies exhibit is mesmerising. Aquariums have a tendency to reek of “something for the kids,” that now-famous shark-tank skinny-dipper notwithstanding, but this is total fun.

Go for a walk in the sky. The CN Tower, the 1,800-foot icon that has anchored the Toronto skyline since 1976, is visited by 1.5 million people each year. On a clear day, its 360-degree view from the LookOut level through floor-to-ceiling windows and a glass floor is spectacular. But the teeth-chattering draw is the EdgeWalk, where groups of six take a tethered walk around a ledge at 1,168 feet, to drink in the view, conquer a fear of heights, scream loudly or all of the above.

Picnic on the beach. Take the short ferry ride to one or more of the three main sections of Toronto Island. The inhabited Ward’s Island has a beach and a few cafés, while Centre Island is geared to families gathering to picnic, ride tandem bicycles, explore the gardens or take their kids to the small amusement park. Those in the know head to Hanlon’s Point and pick a spot on the clothing-optional beach to chill out for the afternoon and people-watch.

Hail the hockey heroes. Make a pilgrimage to the Hockey Hall of Fame. This collection of hockey artifacts is both a sports museum and a hall of fame, exhibiting memorabilia, records, statistics, and trophies on players, teams, officials and honourees across 65,000 square feet. This is your chance to find out more about Canada’s national winter sport (the summer one, and until recently the only one, being lacrosse). Keep an eye out for moving doors and chairs, general moaning and the odd cold spot on the second floor. The Hall is haunted.

Get to know Group of Seven. One of the largest galleries in North America at 54,000 square yards, the Art Gallery of Ontario features more than 95,000 works, from the first century to the present day. The permanent collection includes the largest public collection of Henry Moore sculptures. But the highlight for visitors is the Canadian Collection, which includes work by Thom Thomson and the Group of Seven, a noted group of landscape artists from the early 20th century.

Dig the dinosaur bones. With 13 million artworks, objects and specimens in its collection, the Royal Ontario Museum is one of the largest museums in North America, welcoming one million visitors every year. A national landmark founded in 1914, its myriad exhibitions, collections, events and research projects span the globe and the centuries.

Cross a cultural boundary. Promoting mutual understanding and tolerance, the Aga Khan Museum in north Toronto highlights the artistic, intellectual, and scientific heritage of Muslim civilizations across the centuries, from the Iberian Peninsula to China.

Challenge their little minds. While you’re in the north end, check out one of the world’s first interactive science museums, opening in 1969. The Ontario Science Centre maintains eight exhibit halls with installations, live demonstrations and hands-on learning, digging into everything from biology to astronomy. Plan for several hours, as there is a lot of ground to cover.

Spark one up. Recreational cannabis is now legal in Canada, so if you’re so inclined, you can buy and smoke or vape marijuana on the street, in the park or in someone’s private home. Visit agco.ca for a map of authorized retail stores in Toronto.